Before, during and after the block

There has been a hold up in the stream of sketchbooks. It was all my fault. At this point I have here 4 sketchbooks. But, no worries, they are all finished now and will be posted a.s.a.p.. The reason why I was so slow is because I was *hit* by a painter's block. It was not only the sketchbooks that suffered but the rest of my projects too. To start with I got Dianne's sketchbook. A bit late but that was fine. I got started on it and the painting went really well and relaxed. 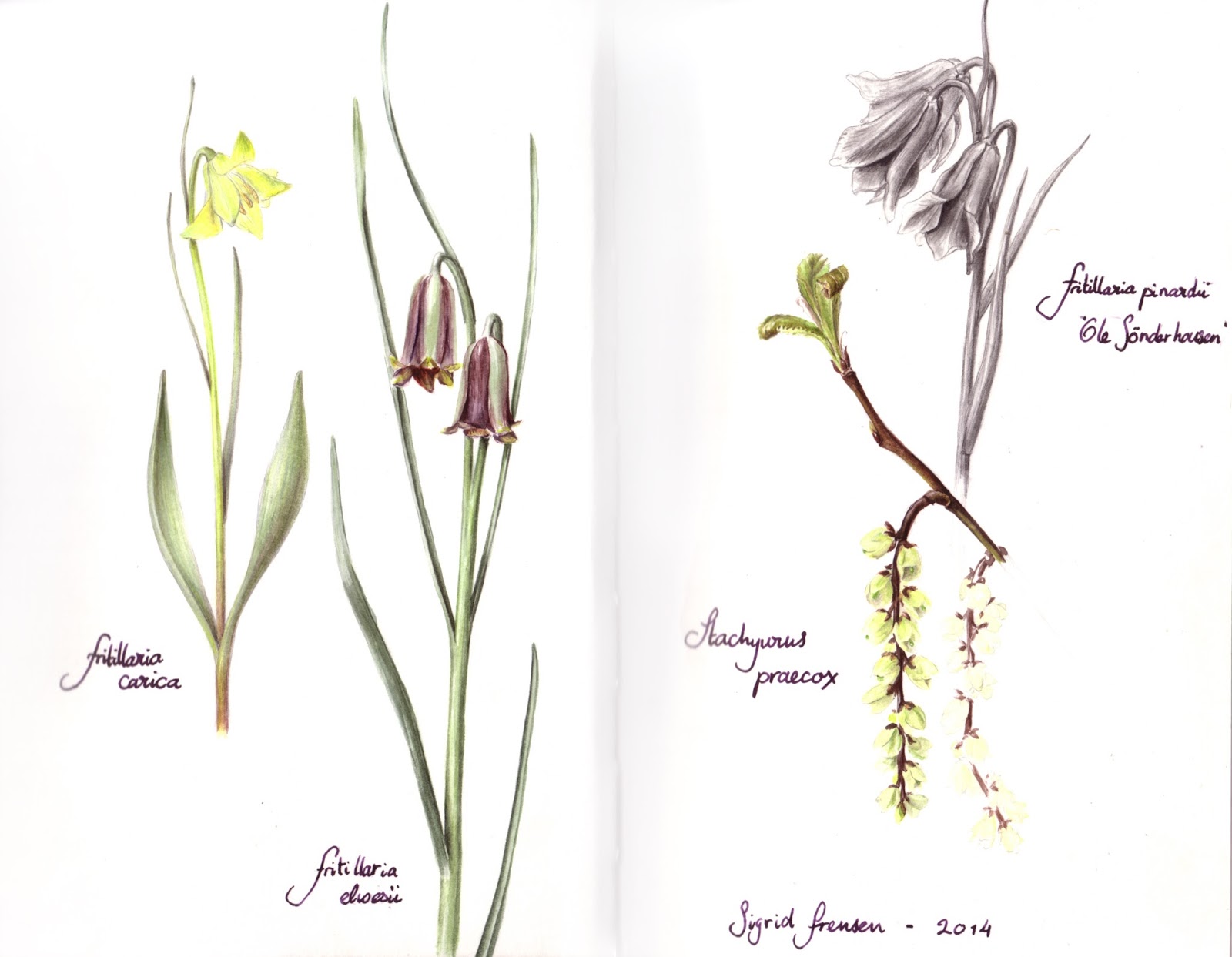 The subjects were mostly special Fritillarias. I knew Dianne really loves Fritillaria so the period I got her sketchbook was perfectly timed. I had to paint some Fritillaria for an other project. The other plant I painted was a twig of a Spiketail shrub I have in my garden. Stachyurus praecox is the Latin name.

So when that was done the next one had already arrived. It was Lorraine's. At the same time I had bought a Helleborus ericsmithii. Really nice and perfect for the sketchbook. I thought it would be wiser to finish it and then post the two books together since the costs are pretty high. So I started with the first flowers and all went well. But after a few days (I did about one flower a day) I got sick. Spring started and so did the flu season. When I got better I started a new flower and it went terrible. I really couldn't paint what I wanted and I felt so miserable.  Not only because it didn't go well but mostly because it felt like messing up a nice page in someone else's sketchbook. Next day I tried again and again I failed to paint something good. Like my paints and brushes had totally different ideas for this sketchbook. I guess that I also wasn't recovered totally from that flu and I felt so, so bad. So I put it aside and in the next weeks I had a big mental struggle to start painting again. I tried a couple of times on scrap pieces and in my own sketchbooks but it felt so wrong and unpleasant.

Finally one day I felt a bit better and made the decision to stop for now with the watercolours and do only graphite sketches. I first did a test on separate piece of Bristol board and it went well. So I took the next sketchbook that had arrived (Terri's). I still couldn't look again at Lorraine's screwed up pages. I picked several flowers from my garden and started to draw. 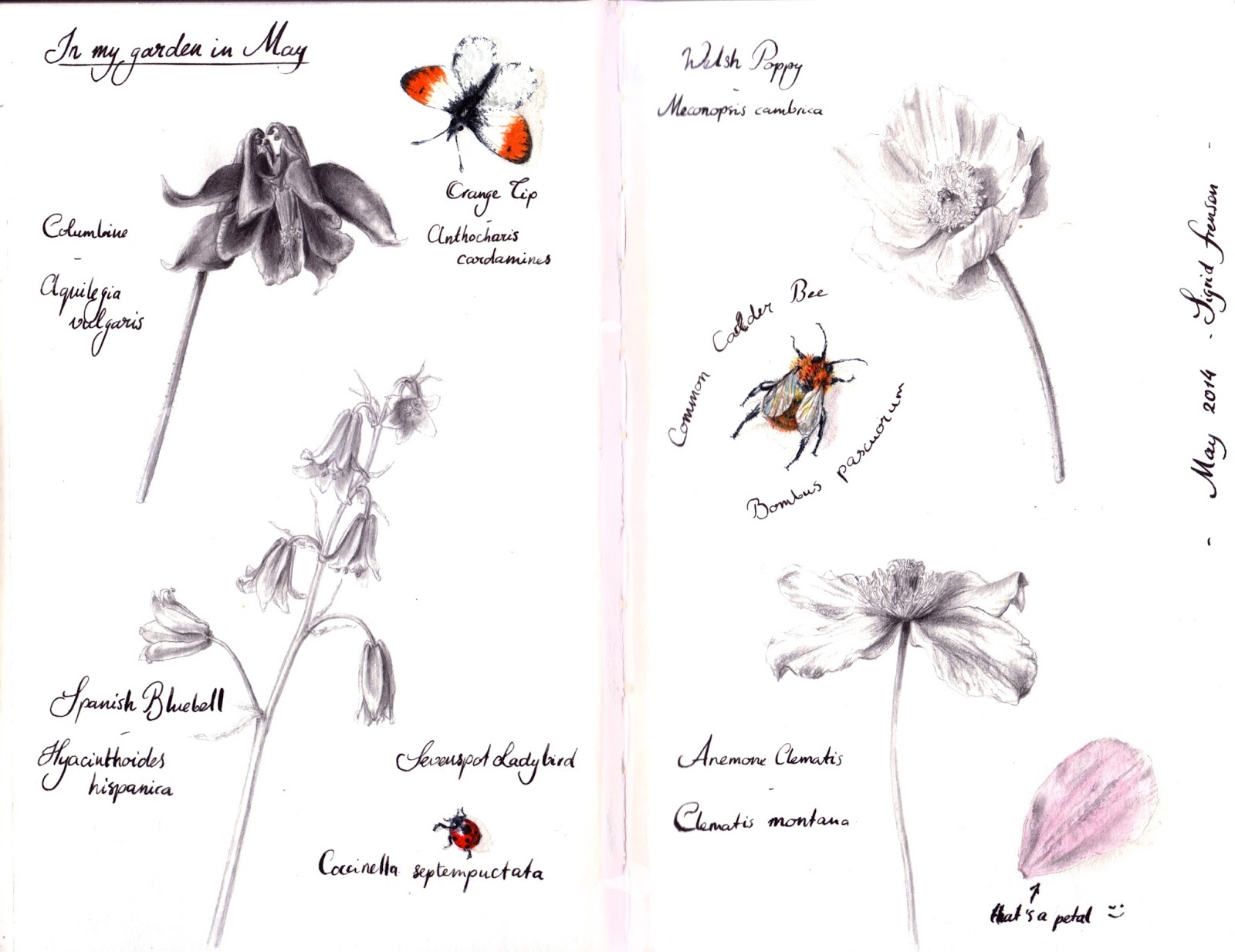 Wow... it really went well!!! And finally after so many weeks I felt better about the project. It's one thing to suffer on your own from such a bad period but if it effects a project with 15 people it really is a high mountain to climb. It's all mental, I know, but once you get in that deep well it is a big struggle to get out of again. Anyway, Terri's got really pretty and I managed to paint in some bugs too to add some colour.

Dianne had asked me if she should keep Jarnie's sketchbook a little while longer but since it now felt better I thought I should hurry up now and get that one done as well. So, here's Jarnie's: 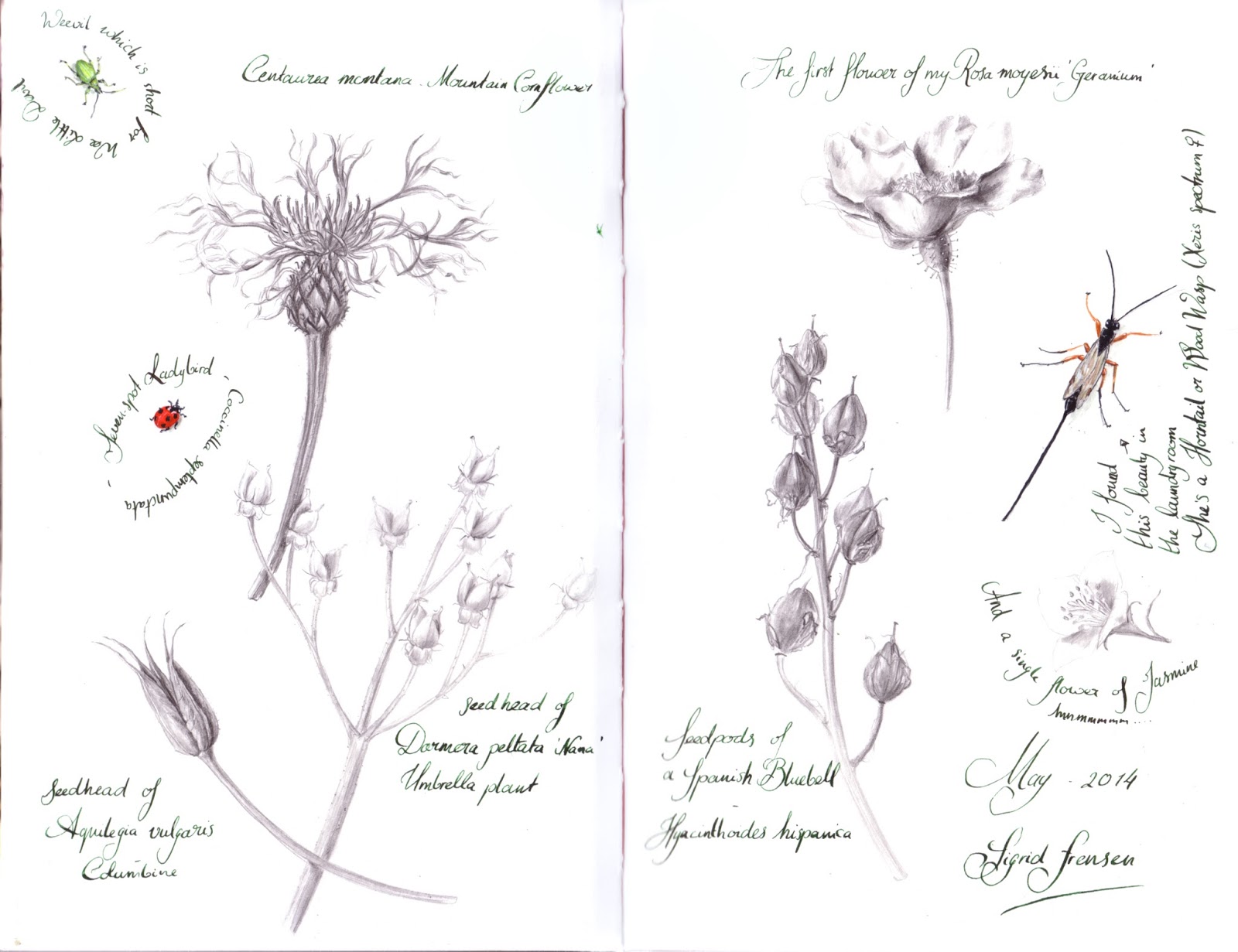 The Horntail was a nice surprise in the laundry room. My son Bertus picked a Cornflower to draw, so that's in it too. I just get so happy from the festive cornflower shapes.

So, that was that and almost ready to post FOUR sketchbook... Can you believe it???? FOUR!... Oh dear, dear... All that was left was the pages in Lorraine's book.... grrrrrrrrr.... but, I was determined to finish it well and not just send it off like it was. So today I picked a leaf of the Helleborus and made a graphite sketch of it. 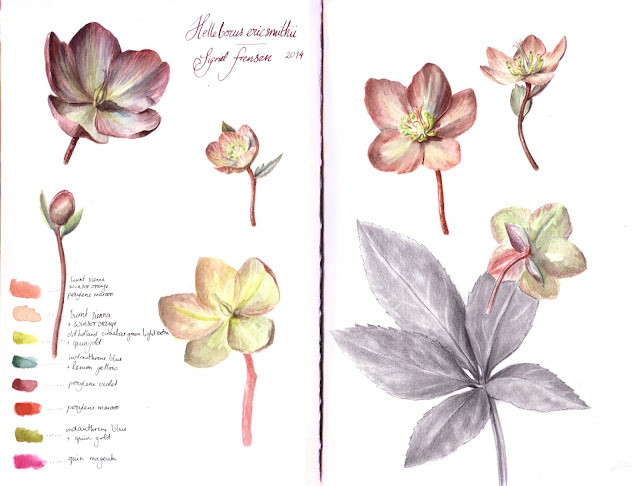 There, done! Hope all four ladies will like my entries. In the end I enjoyed all four of them... apart from that huge hiccup (forgive me for that)  ;)